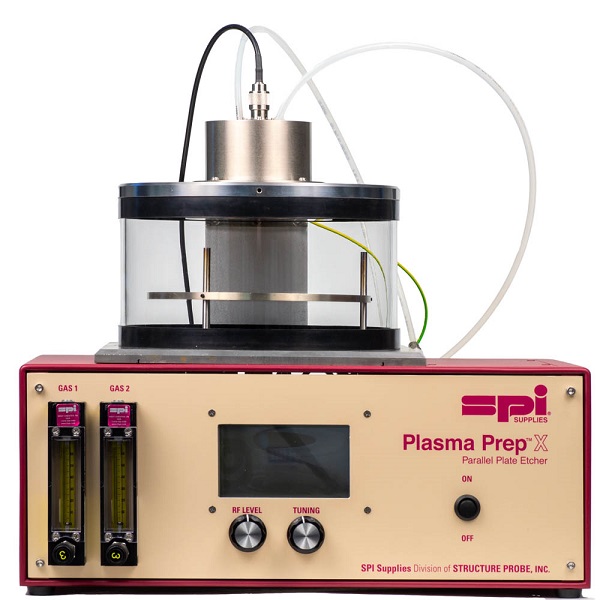 Plasma Prep X Parallel Plate Plasma Etcher
For laboratory applications, the typical plasma etcher has a "barrel" design, or in other words, a cylindrical or barrel geometry to the reaction chamber. One feature of this design is that any point on the surface to be etched can be approached with equal probability from all directions, leading to an etch that is described as being "isotropic". For most if not many applications generally, an isotropic design is probably the design of choice. But in some instances, such as the removal of a passivation layer from an electronic device, isotropic etching always results in undercutting, and when the lines are below a certain point in width, such processing completely undercuts the lines leading to the layers literally falling off. But because for a "barrel" design, one can achieve respectable etch rates at relatively low power, the systems can be built and sold at lower prices.

Who needs the PlasmaPrep X Parallel Plate Plasma Etcher?
This system is designed primarily for one application, that is, for the anisotropic removal of glass passivation layers for failure analysis in the solid state electronics industry. It is typically used with CF4 (or some other reactive fluorine gas) as the primary gas. Two separate gas inputs are available on the Plasma Prep X system.

The selection of the chamber is based on the intended gas usage. If one is using oxygen of argon, then a Pyrex chamber is sufficient; if CF4 or CCl3 is used, then quartz is necessary as a Pyrex chamber will be attacked by these halide species. The system does not include a simple water circulator. We would recommend that a small water chiller be used which will provide a reliable flow of cool water, such as the Oasis. The basic system does not include a pump. We would recommend the Pfeiffer Vacuum Model DUO 3 Rotary Vane Pump for this system. For turbo systems, no additional pump is needed.