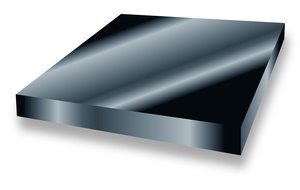 Our SPI-Glas glassy carbon (vitreous) plates are available in two grades, SPI-Glas 11 and SPI-Glas 22 in a variety of sizes and thicknesses. Our present technology only permits us to make plates up to 6 mm thick.

There are a wide variety of applications being discovered on an on-going basis for the SPI-Glas Glassy Carbon Plates. Probably the largest single application is for fuel cell and other electrochemical electrodes. The SPI-Glas glassy carbon plates are also used in "mechanical applications" such as when used as a structural component of a furnace. The glassy carbon plates are also being used in thin film applications. Some users of scanning electron microscopes (SEMs), where high purity is required, are using the glassy carbon substrates to support samples while being examined by SEM/EDS. Because of the unusual surface properties of the glassy carbon, a number of liquids spread far easier on the glassy carbon than on other carbon based substrates. Consequently, the preferred method for the examination of human blood by SEM or other methods is to do the spreading of the blood sample, on glassy carbon. The glassy carbon substrates are also used for certain thin film deposition experiments. The removal of the glassy carbon is relatively easy using the SPI Plasma Prep II plasma etcher so the deposited coating can be picked up and examined, as is, for TEM or embedded in SPI-Pon Epoxy Embedding Resin and thin sectioned. This is a far faster route to TEM data than the more traditional ion milling approach. Of course, substrate effects can be important to one's results and therefore, this kind of reasoning must be done very carefully.