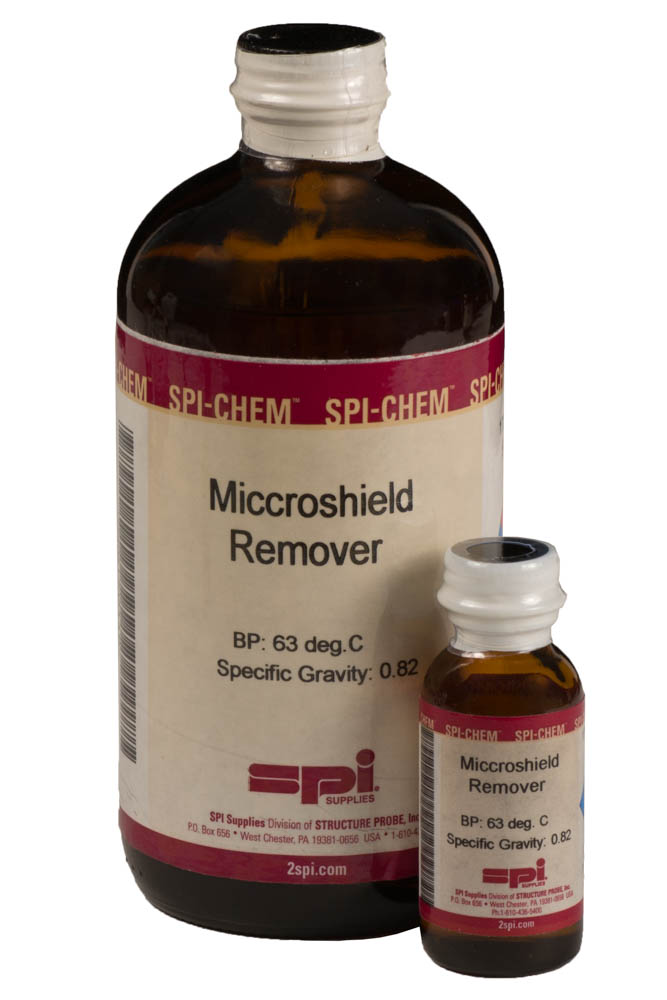 Miccroshield is the perfect protectant for those areas of the sample that are not to be polished or thinned during sample preparation using most chemical methods. This kind of approach is quite popular with anyone using one of the "window" approaches for the thinning of a specimen. After the completion of the preparation procedure, the Miccroshield areas are easily removed with the specially formulated SPI Miccroshield Remover. And like other products of this type, these also are flammable.

A few collective comments from some experienced users:

Miccroshield's largest use in microscopy is to mask silicon for chemical polishing with HF. There are of course numerous other applications, but the masking of silicon seems to be the predominant application. Miccroshield seems to be very resilient to HF (as well as ~ 1% Br in HF).

Some experienced users recommend diluting the as-received Miccroshield 1:1 with acetone. The material in this form seems to be much easier to use than straight out of the bottle. Make sure that any acetone used for this purpose is ACS purity or better, since any residues in the acetone will end up being left behind on the sample.

The only possible drawback we have heard about is that there seems to be at times a small residue left on the sample, when dissolving with acetone. We believe that the use of the special Miccroshield remover would leave less residue but we are not 100% certain about that. In any case, we do recommend the use of the special thinner as shown above.

Conventional wisdom would have caused us to conclude that all residue problems could be solved instantly by plasma cleaning but the lower power of the "cleaning" units is not completely effective in terms of removing all of the residue. We would recommend that such residue removal be done in a plasma etcher, such as the SPI Plasma Prep II Plasma Etcher using either O2 or a combination of O2 and Ar.

Another product that has been used for this purpose is Crystalbond™ 509. Like Miccroshield, Crystalbond 509 has to be dissolved up in acetone and can be used in a similar way. However, some users report it is not quite as convenient to use as Miccroshield, even though it does seem to be comparably resistant to HF. For some working in distant locations and in foreign countries, the main advantage of Crystalbond 509 over Miccroshield is that it does not have to be shipped as "dangerous goods". Or putting it another way, the shipping costs are far less for the shipment of Crystalbond 509 than for Miccroshield.

Miccroshield left full strength and fresh dries to a "tough" finish in 5 or 10 minutes. After a few hours it becomes harder and more brittle, but still adheres well to clean surfaces. It can be diluted with acetone for thinner coatings. The characteristics remain similar, but drying is faster. Acetone and Miccroshield seem to be infinitely miscible in each other.

As indicated previously, Crystalbond 509 can be dissolved in acetone also and painted on a surface. It can also be diluted down and painted on as an even thinner line. We believe that the coating hardness is similar to that of Miccroshield.

Note: We are most appreciative for some of the technical information relative to the use of Miccroshield to the following: Jon M. Hiller and Bernard Kestel of Argonne National Laboratory, Electron Microscopy Center, Materials Science Division, 9700 S. Cass Avenue, Argonne, IL 60439 USA.

We want to stress that in no way are these two researchers "endorsing" Miccroshield, both feel there could very well be other products that would work quite comparably. But we thought it important to be able to share their experiences using this product to make life easier for others following in their footsteps.