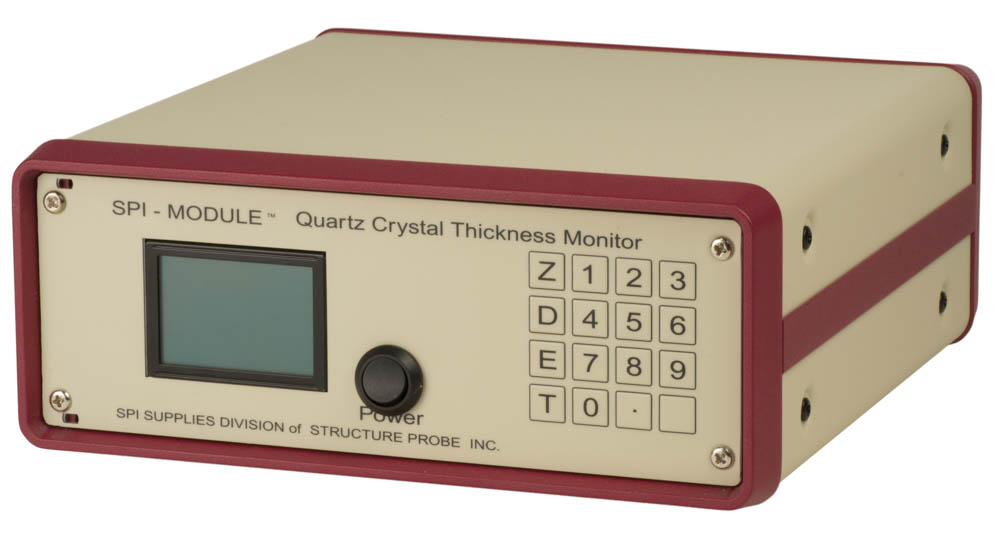 This handy module is available as a stand-alone unit, or it can be built right into the SPI-MODULE™ Vacuum Control Base. Featuring a highly accurate control for setting deposition thickness, the module also has an easy-to-read LED digital display. This is surely a handy kind of addition to any SEM lab sputter coater so long as there is some flow of samples that would derive benefit from its use. If you are considering the purchase of a quartz crystal thickness monitor, you should have some familiarity with the way it operates. It is designed for the horizontal placement of the quartz crystal.

We provide the unit with a 6" (152 mm) length of high temperature wire. It is important that the crystal be as close as possible, electrically, to the external oscillator, to minimize capacitance effects. A longer wire may result in a unit that does not function properly. We use only the very highest quality, hermetically sealed BNC feed throughs that money can buy today.

Originally developed to enhance the possibility for obtaining reproducible coating thickness, a Quartz Crystal thickness monitor works best with metals and other samples not prone to off gas surface absorbed (or even absorbed) moisture. So long as moisture is off-gassing, no metal will deposit onto the sample, yet during this time, the "crystal" of the monitor is being coated. Hence in that kind of a situation, the thickness that deposits on the crystal is not necessarily the same as what is being deposited on the sample.

For moisture sensitive samples, use of the "test" modes in both the SPI Module Sputter and Carbon Coating systems will produce reproducibility in coating thickness at least as good if not better than the best quartz crystal monitor in those circumstances.

However, for semiconductor, thick film, solid metal samples, the SPI Quartz Crystal Monitor would be an excellent tool to increase the reproducibility of coating thickness even more. The system is bakeable to at least 105° C, and there is no real reason one could not go higher.
Expected Precision:

The SPI Quartz Crystal Thickness Monitor (QCTM) displays a measurement of film thickness to a precision of 1 nm. Its resolution can be no better than this. The practical limitations on resolution are very basic, because what is being measured is the change in mass of the crystal and displaying the information as the change in thickness of the film, and in thin films, one does not actually "know" the density of the film; this assumption, more than anything else, means that the QCTM gives an approximate measurement and that it is more suitable for assuring that a particular thickness is repeated between runs, rather than for actual measurement of the film thickness. Most of these uncertainties can be resolved by diamond knife thin sectioning of actual films on a thin plastic substrate in order to calibrate the measurements, but the overall uncertainty of the measurement is several tenths of a nanometer; we have not done rigorous calculations of the uncertainty.
Updates of the data:

There is a problem with updates in that it slows down the display enough that it will show a particular number long enough to be read; the flickering of the last digit of the display can be to some users, annoying. The display information is still updated several times per second even though it might not be reflected in what one sees when viewing the display.
Density and thickness settings:

Density can be set for any value between 0.1 and 99.9 g/cm3. There is no setting for acoustic impedance. The monitor displays the range 1 to 999 nm of thickness.