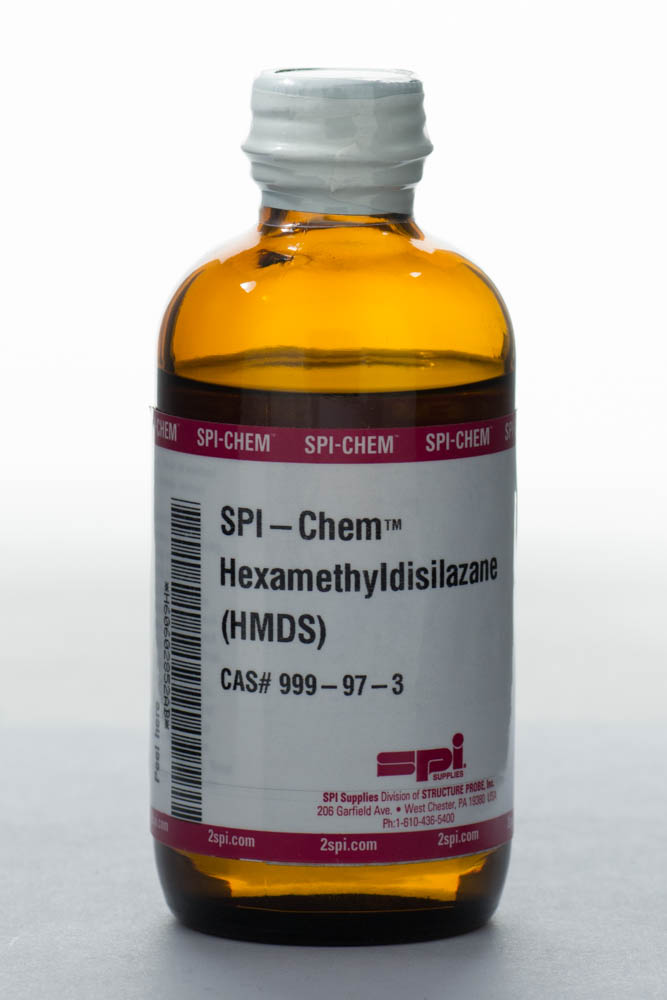 This interesting liquid product can be, at times, a good substitute for critical point drying CPD, especially for those laboratories not having available a good critical point dryer. Because of its generally rapid infiltration, it is ideal for the preparation of insect tissue. However, do not expect the results, in general, to be as one would get with the use of a good critical point dryer. Remember, we "recommend" the use of Hexamethyldisilazane only when a good operating CPD unit is just not available. Until recently, the main application for HMDS has been in life science microscopy but in more recent years, interesting applications in materials science have been found.

Who would find the HMDS approach useful?
Workers who are doing their SEM examination at relatively low magnifications or are working with samples, known to not possess any fine structure that would otherwise be seen at the magnifications of interest would probably be those most likely to find the HMDS generated results to be the most acceptable relative to critical point drying. For example, excellent results have been reported for pollen in the publication: "Hexamethyldisilazane as a Drying Agent for Pollen", Biotechnic & Histochemistry 69, 192-198 (1994).

Known limitations of HMDS:
Naturally, the seriousness of these limitations might be in the eyes of the beholder. But we would point out that when HMDS is used (instead of critical point drying), one does experience shrinkage of tissues, especially of connective tissues. HMDS is caustic, and flammable, and should be used only in a fume hood. Some might characterize the use of HMDS as being outright "nasty" when compared to the use of CPD.

Other miscellaneous information:
For relatively larger samples, the quality of the final result can be enhanced if the final dried sample is put in a vacuum oven at 55-60°C for several hours to be certain that that sample is indeed completely dry before gold coating, prior to SEM examination. If moisture is still diffusing out of the sample during sputter coating, not much gold will deposit and the sample will end up without the desired surface conductivity.

Silanization of glass surfaces:
Glass microscope slides can be made hydrophobic using SPI-Chem HMDS. The procedure is simple and works quite well. Place the slides, separated, in a wide mouth glass jar preferable with a PTFE lined cap. Add a few drops of the HMDS which will then vaporize in the sealed jar reacting with the surface of the slides. Better results are obtained if this is done while keeping the jar at 70° for twelve hours, but with the cap slightly ajar.

At the end of the twelve hours, remove the slides. Water droplets will now "bead up" on the slide surfaces. The layer responsible for the hydrophobic behavior with we less than one nm in thickness and will also be completely invisible to the eye.

Applications in semiconductor technology:
HMDS is an outstanding adhesion promoter especially in terms of improving the adhesion of photoresist to the wafer surface. It is deposited on the wafer surface prior to the deposition of resist.

Applications in nanotechnology:
The preparation of non-interacting and non-touching nanoparticles is one of the biggest challenges faced by workers in this field of research. For those interested in the controlled synthesis of non-aggregated nanoparticles with diameters between 1 and 50 nm, one can synthesize nanosize SiO2 particles from hexamethyl-disiloxane (HMDS) as precursor and oxygen as the oxidizing agent.