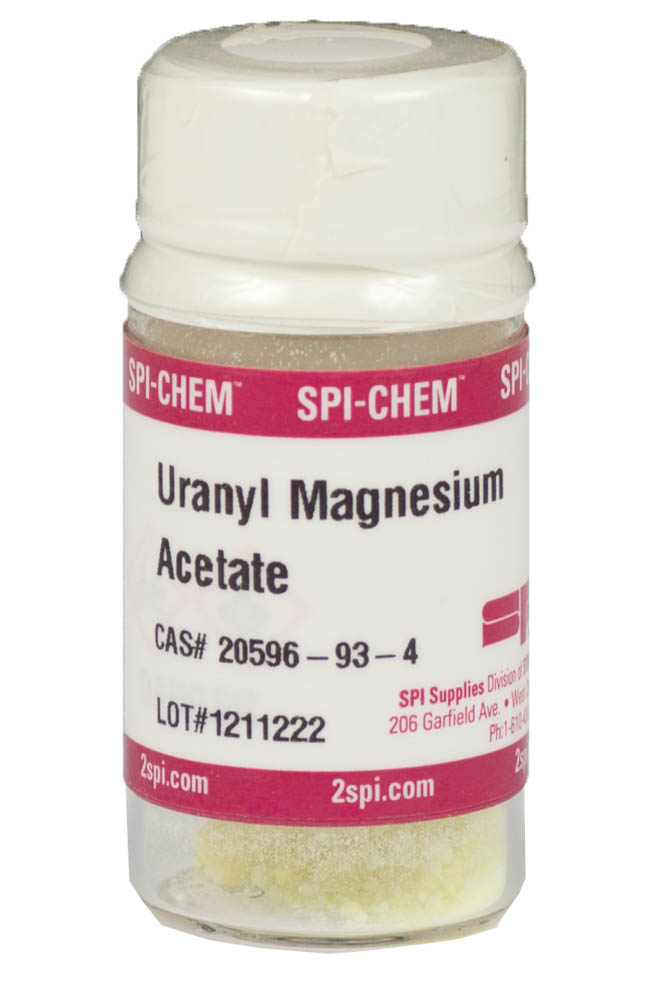 Introduction:
This is a new uranyl compound, and researchers are only now finding out the advantage of uranyl magnesium acetate over other uranyl compounds. So far the applications about which we have become aware are confined to electron microscopy. For example, researchers (names unknown to us) at Ohio University publicized the following information:

Method:
a.. Dissolve the uranyl magnesium acetate in the buffer. The pH of the final solution should be 5.15. Check with pH meter.
b.. Store in a dark bottle at room temperature.
c.. Use to stain tissues after osmium post-fixation. Rinse before and after with 0.05 M maleate buffer, pH 5.15.

Radioactivity statement:
This material is made from depleted uranium, meaning that it is uranium from which the radioactive isotopes have been greatly reduced in concentration.

Health and environmental
Uranyl magnesium acetate is highly toxic by both inhalation and ingestion. Cummulative effects are also probable with the target organs being the liver and kidneys. It is toxic to aquatic organisms, and may cause long-term adverse effects in the aquatic environment. As with all compounds of uranium, even depleted uranium, it is radioactive to a degree that is dependent on its isotope ratios.

Restriction on shipments:
Uranium-containing compounds, as well as uranium metal are subject to special restrictions from both the United States and other governments both for export from the USA as well as for importation into other countries.