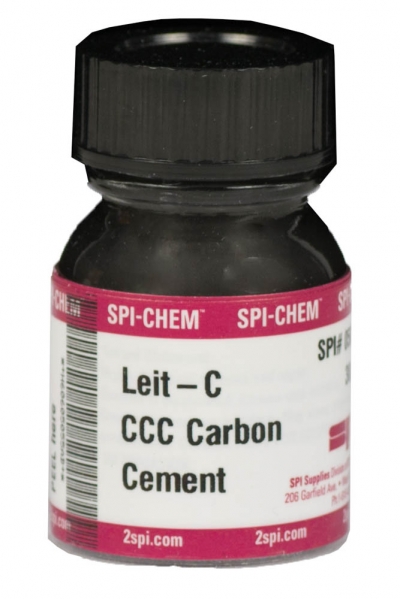 Leit-C™ CCC Conductive Carbon Cement is electrically conductive, and was formulated specifically for the mounting of samples for examination by SEM.

Because of its electrical conductivity, all samples are ready for insertion into the SEM immediately after drying of the product. If it is a non-conductive specimen, then there is the strong likelihood that some kind of metallization would be preformed on the sample, such as by sputter coating or if a FESEM is being used, possibly even by osmium coating.

The Leit-C CCC conductive adhesive contains only carbon, hydrogen, and oxygen, therefore after drying, there would be no peaks detected by EDS other than the three elements, even with windowless detectors. If the entire specimen holder is "painted" with CCC, the cement will mask the holder and in general, one does not detect x-rays from the holder itself and would could interfere with x-rays from the specimen itself.

The product is considered air drying and the application of heat is not necessary. For use in a UHV system, so long as it will not change the sample itself, a bake-out can be done up to 100° C. Going to higher temperatures should cause degradation of the small amount of acrylic polymer binder present. Also, as one uses the product, and there is evaporation of the carrier, addition of the special thinner will enable the user to maintain constant viscosity and carbon solids.

We offer a choice of thinners, one being the "official" thinner formulated by the manufacturer of the Leit-C CCC adhesive product, and a second (and less expensive) one formulated by SPI Supplies.