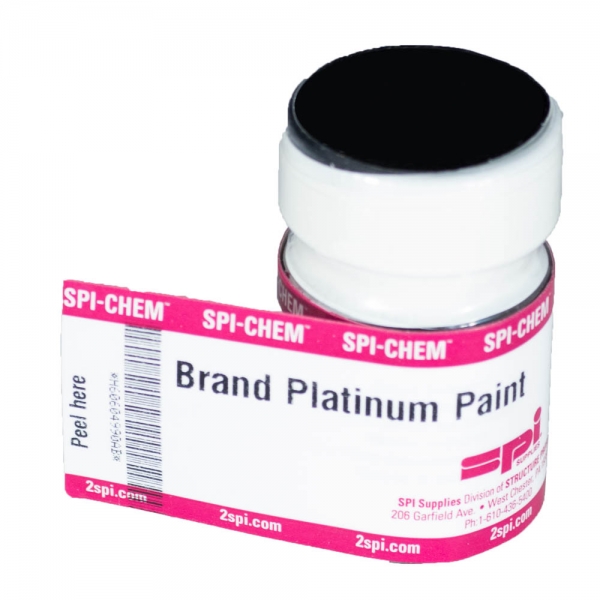 Platinum Conductive Paint has been formulated for those applications requiring high temperature performance as well as chemical inertness. The product, when compared to silver, is roughly two orders of magnitude higher in cost, so it should be selected only after the  Silver Conductive Paint has been tried and found to not work under the conditions of the experiment, or would be known to not work, just on the basis of first principles. When applied on a surface, the thin layer, after firing, takes on the bulk properties of platinum.

There are other applications where silver fails because of its sublimation characteristics: In a vacuum at temperatures over ~ 550°C/1022°F, the sublimation rate of silver becomes appreciable, and therefore, can be taken above that temperature range only for short times, if at all, before running the risk of vacuum system contamination. Those working in high temperature superconductor (HTSC) applications encounter this problem presently; there is the demand for ever higher temperatures, but those using  Silver Paste Plus to adhere the wafer to the heater head, must stay below this temperature range.

% Pt solids: 75%
Particle Size of Pt colloid: 0.5 to 5 µm
Resin Content: About half that which is used in the silver paint.
Resistivity: 0.4 ohm/cm (about two or three orders of magnitude higher than silver)
Resin Type: Identical to the silver material (for proprietary reasons, its composition is not disclosed).
Viscosity: Not measured (to minimize material loss) but estimated to be similar to that of the SPI Silver Paint.

The raw ingredient list for the  Platinum Conductive Paint is identical to that of the Silver Conductive Paint with the exception of the metal solids. We would not expect the processing to be different from the silver product however the sintering of the metal particles would obviously occur at far higher temperatures than for the silver. In terms of sublimation of the metal in a vacuum, this too would be expected to not occur until far higher temperatures than for silver.

Platinum Conductive Paint from SPI Supplies vs. platinum paste from other sources:

The only real difference between a "paint" and a "paste" is the difference in platinum solids (the paste being substantially higher in metal content than the paint). But in the case of commercially available platinum pastes, they almost all contain a glass frit and are not pure platinum solids plus suspending medium. These other products are referred to as "reactive bond" products, that is, they contain a glass frit which is specifically intended to promote adhesion to a zirconia substrate. The Platinum Conductive Paint from SPI Supplies contains no frit. It provides better chemical purity and temperature resistance, but at the risk of lower adhesion to many surfaces. Our Platinum Conductive Paint contains a much more sophisticated binder system than any other platinum paint or paste of which we are aware.

Adhesion of the Platinum Conductive Paint to Substrates:

The properties of platinum, other than its corrosion resistance and high melting temperature, are not particularly good, and one cannot expect platinum to have mechanical properties like steel at any temperature. Some of our existing customers are known to be using this paint on substrates which are known to pose adhesion problems, such as ceramics and stainless steel, and they experience adequate adhesion, but this does not necessarily mean that the paint will have adhesion which is adequate for all situations when it is applied to other substrates. We can only remind the reader that the use of this kind of product has to be considered "research" in nature and in the end, it might be necessary to just "try" some and find out whether it will or will not work in their particular situation.

Some other useful comments:

The high price is dictated by the fact that a) the market price per gram of Pt is about 100X that of silver and b) the density of Pt is about double that of silver, so a given weight of Pt suspension has the appearance of being about half as much present as for silver. The fill volume of the material in the bottle does not look like much is there (in comparison to a bottle of Silver Conductive Paint) and we  admit that when compared to our silver conductive paint, there is not very much in the bottle. The fill volume you see is a full 10 g of Platinum Conductive Paint. There is also a strong tendency for the platinum solids to settle out, probably because of the density of platinum. However, if some of the Thinner for Platinum Conductive Paint is added, it can be re-suspended. Please note, the re-suspension will require a few minutes in an ultrasonic bath to completely re-suspend the Platinum Conductive Paint.