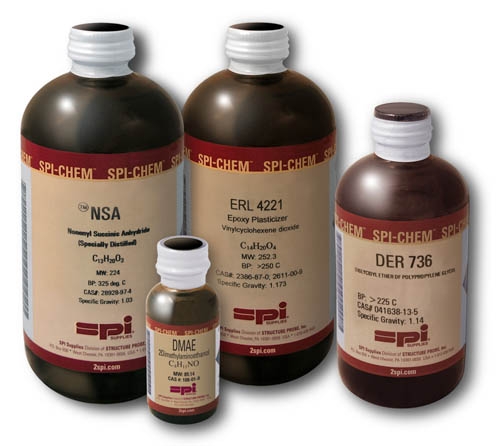 This resin system offers superior penetration of tissue and other sample material. Noticeably lower in viscosity than Epon® 812, SPI-Pon™ 812, or Araldite® systems, the kits based on "Spurr formulations" are easy to mix, cure quickly to a controllable hardness and perhaps most important of all, they are easy to section. These Spurr type formulations are very popular with those having the need to embed plant tissue which requires a very low viscosity resin that also can be used under conditions that there can be a very slow infiltration to penetrate heavy cell walls.

Ultra-thin sections for TEM are stable in the electron beam and usually can be mounted on 200 mesh grids without the need for a supporting film. Block "hardness" can be easily adjusted by adjusting the amount used of DER 736, which acts in the formulation as a plasticizer. This formulation is "known" for its stability while under electron beam.

Also, keep in mind that these "Spurr formulations" appear to be among the most highly crosslinked of all embedding resins used for both LM and TEM, and on first principles, as well as found in practice, this higher crosslinking results in much slower penetration of stains, either for LM or electron dense stains for TEM. So for at least some applications, this might not be the stain of choice.

Some hints for the first time user:

The so-called "Spurr" resins seem to be less forgiving in terms of errors in temperatures, ratios of the components, etc, than our highly successful and popular SPI-Pon™ 812 Embedding Resin System. When things go wrong, however, there is only a "short list" of things to look for in terms of finding out why proper embedding did not occur:

Always remember that this system can be affected negatively by moisture so if one or more of the components are stored chilled, be sure to allow enough time to warm up to room temperature to avoid any moisture condensation on the resin itself.

We are addressing now the cured block, something that to most people is about as inert of a material as one will find. But the standard practice in many laboratories is to use a small jeweler's (or even a small hack) saw to cut the block down to the right size, sometimes even to shape it. We want to address the dust that is generated and how its exposure can and should be minimized.

Reasonably long shelf life of the "components" can be expected.