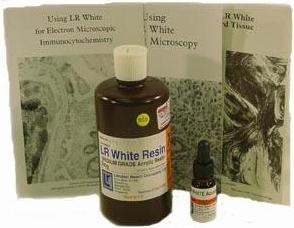 $138.22
This item requires a cold pack for shipping

This one step single component acrylic embedding resin system has many advantages, its ultra low viscosity, only 8 cps, is almost like that of water and will infiltrate just about any type of sample. Even large blocks impregnate surprisingly fast. Another feature is convenience since one can do both TEM and LM sectioning from the same block.

Polymerization is started either by heat or when the need to preserve the sample's antigenicity is paramount, then also by a low temperature UV cure. One characteristic of the cured block is that sections tend to be quite hydrophilic. Actually LR White is quite a versatile embedding resin and there are quite a few interesting applications that have been described. So far as resins go, LR White is pretty easy to use, andproblems when they do arise, are encountered only very rarely.

This technique has been used to increase the accessibility of the antigenic sites, or "antigen retrieve" in the section for immuno electron microscopy. We would recommend the paper "Antigen Unmasking for Immuno electron Microscopy: Labeling is Improved by Treating with Sodium Ethoxide or Sodium Metaperiodate, then Heating on Retrieval Medium", Journal of Histochem. and Cytochem., 43:115-123 (1995).

There have been numerous reports in the published literature describing various staining techniques of immunolabeled sections. Most of them involve the use of uranyl acetate as a negative stain.

For many workers, there is experienced some difficulty embedding plant tissue with other embedding resin systems. LR White, with its viscosity that is like water, can be very easily infiltrated (relatively speaking, of course) and there has been quite a bit published on the embedding of plant tissue.

The resin itself comes ready to use and if intended for use at low temperature, one would need SPI #02648-AB, accelerator which comes in a convenient dropper bottle. Available in three grades, hard medium and soft, with hard and medium grades for most users being much more popular than the "soft".

Despite the less rigorous processing associated with the use of LR White, neither the appearance or the amount of the extracellular material was affected by the different embedding protocols. We interpret this to mean that some antigenic sites are more sensitive to alcohol disruption than others, and in this case, the sites must have been quite resistant to such disruption. But for other systems, the opposite is true. The point is, for a new system, it is often times worth trying several different embedding approaches, in order to determine the one that is the most optimum for that specific situation.

All three resin grades can be polymerized either chemically, at low temperature using UV irradiation at 365 nm, or by elevated temperatures, either by conventional oven or microwave techniques. Note that this resin system is not compatible with the use of acetone, since the presence of any ketone will inhibit polymerization.