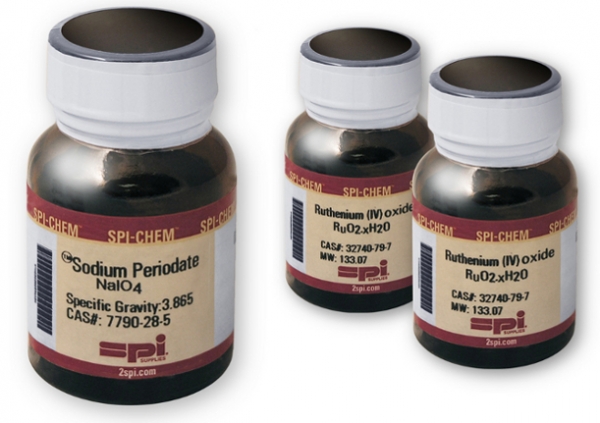 For many years, the use of ruthenium tetroxide was greatly limited because of the explosive nature of the tetroxide and in some laboratories, there were prohibitions against its use. For example, RuO4 in whatever form is generally regarded as too unstable for safe laboratory storage under any circumstances. And very frankly, we would be afraid to ship anything that unstable anyhow!

The secret of the SPI developed kit is this: We utilize ruthenium (IV) oxide hydrate, a crystalline solid, and sodium periodate, both of which are safe and stable, to "make", when mixed together, RuO4 in extremely small quantities. Once mixed, so long as the instructions are followed exactly, the amount of the dangerous component is quite small, bordering on being minuscule, and whatever hazards would normally be associated with the use of RuO4 in other circumstances are greatly reduced.

The use of RuO4, which is being generated in minute quantities, results in the reduction of the material from RuO4 to RuO2, in comparison, a relatively nonreactive compound, with properties much like OsO2, similarly nonreactive. The formula calls for the use of an excess of the periodate, however, sodium periodate in aqueous solution itself is not stable and quickly breaks down, again, to relatively nonreactive species.

In any case, the mass of the tetroxide when used this way, as opposed to the way osmium tetroxide is normally used, involves a far smaller amount of this nonrenewable resource.

Complete instructions for the preparation of 0.67% aqueous RuO4 solution are included with each kit.