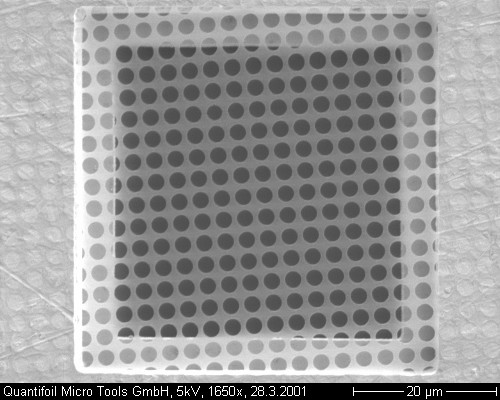 Quantifoil holey films with 2 µm circular holes are used with magnifications in the range of 30,000X to 40,000X. Quantifoil R 2/4 is probably recommended over R 2/2 when an increased tolerance with respect to position of the beam, and a larger beam diameter is desired, such as in the case of automated image acquisition. Quantifoil R 2/1 has more open area than R 2/2. It is usually used when focussing is carried out on the edge of a hole burned into the ice in a neighboring hole instead of on the foil adjacent to the hole.

The Quantifoil holey films are available on "standard, stock" grid mesh, namely 200, 300, 400, and 100x400 mesh, in Cu, Ni, Au and Rh plated Cu. Other grid meshes and other grid constructions are possible, of course, but on special order and for a higher price.

Don't know which holey grid pattern is for you?

Try the Quantifoil Holey Grid Sampler Kit for an economical price, try out and evaluate which grid pattern is the best for your work and then order with greater confidence the larger grid packs of 100 coated grids.

The carbon film thickness is closely controlled to be within the range of 10-12 nm. Across the film, there is virtually no thickness variation. Note that wherever there is the carbon film, there is the possibility for a thin (less than 20 nm) polymer layer, remaining from the production process. We always try to remove all of it, but sometimes, some thin amount does remain. However, the holes are guaranteed to be "clean", there is no polymer film layer covering any of the holes. So when you take data from a sample that is "over" a hole, you can be sure that there is nothing other than the sample in the path of the electron beam.