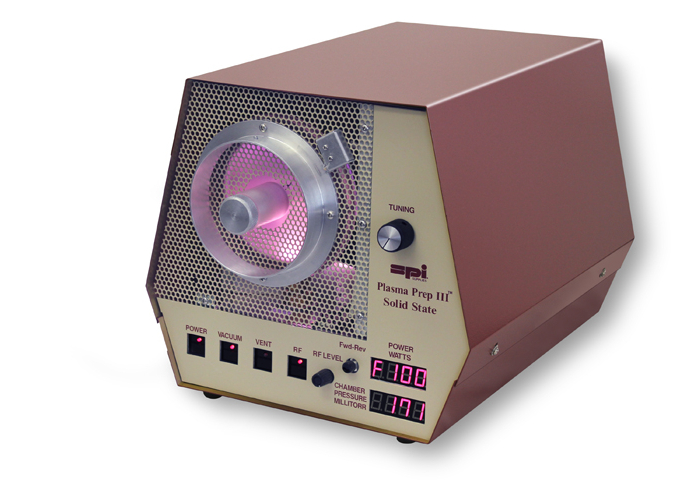 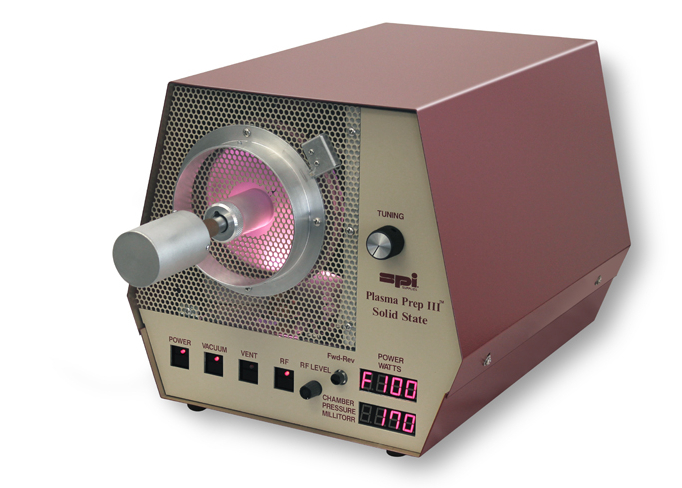 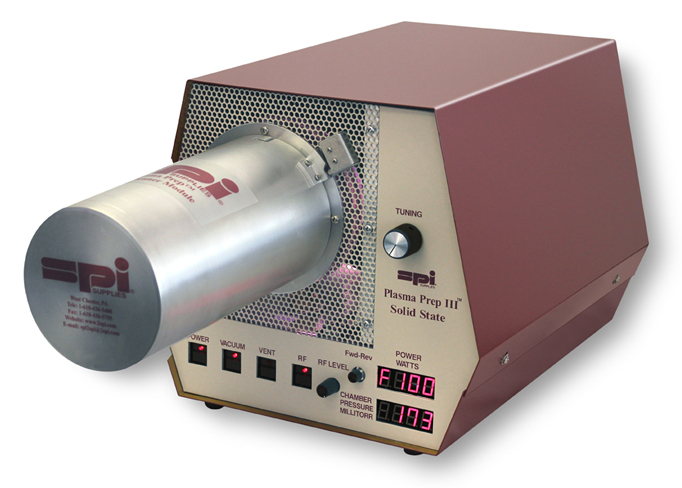 The SPI Plasma Prep™ III Plasma Cleaner is a compact "bench top" sized plasma cleaner, that uses the "dry plasma process" for the removal of contamination on the TEM specimen holder. The unit can also be used on the sample itself, whether in regards to the cleaning of the sample, or exposing it to a glow discharge process.

The unit is the same type of plasma cleaner instrument that was used by Dr. Nestor Zaluzec in the discovery that if this kind of contamination is removed, the contamination rates on samples are greatly reduced, and therefore, one sees a significant increase in the contrast and over all quality of the data in the final TEM image. Now this unit has been upgraded to the solid state technology for even better control over the power needed. SPI Supplies manufactures and offers for sale plasma cleaning equipment for this purpose according to the terms of a license agreement granted by Argonne National Laboratory

Capable of 1 to 100 watt operation with most work done in the 1 to 10 watt range. This low wattage allows operation with argon without having deleterious impact on either the specimen holder, rod, or the specimen itself. This low power is enough to dislodge surface held contamination but not enough to actually "etch" the sample or rod or holder assembly.

Barrel type design for isotropic plasma cleaning which is the ideal geometry of the plasma to get into the various "nooks and crannies" of the specimen holder and contact areas between the specimen itself and the holder assembly.

Air vent bleed control valve: Allows operator to precisely control the rate of air flow when venting to the chamber. A sudden rush of air could disturb a fragile sample. The valve is easily accessible inside the cabinet of the plasma cleaner but discourages the changing of the bleed rate

Highly portable: Weight is only 32 lbs (14.5kg), not including the weight of the separately installed rotary ("mechanical") pump. We suggest the Pfeiffer DUO pump

Make sure you appreciate the following:

Sometimes there is some confusion of the terminology, that is, what is a plasma etcher vs. what is a plasma cleaner. Generally speaking, a plasma etcher is a unit that operates at 100 watts or higher but a plasma cleaner operates at power levels perhaps as low as 1 watt and is designed to "tickle" the top surface of anything it sees. So for the purpose of removing thin adsorbed layers of contamination on a TEM foil sample for example, or on the sample holder itself, a low power plasma cleaner will do the job just fine. Indeed, using argon for example, at higher power could actually "etch" and cause damage to the metal parts of the microscope stage.

The Plasma Prep™ III Plasma Cleaner is based on the same design as the Plamsa Prep™ III solid state system. If your application is to remove photoresist, for example, from a silicon wafer, then what you really do need is a plasma etcher capable of running at 100 watts and so we would recommend our SPI Plasma Prep™ III unit (this also has a larger chamber access).

Insert the rod and holder assembly into the glass reaction chamber, introduce your choice of gas, either oxygen or argon (depending on the specimen being examined), to the base pressure of approximately 250 mTorr and apply RF power (13.56 MHz) to the chamber. This excites the gas molecules present to a highly reactive plasma state. At the 10 watt operation level (or less), the plasma will easily be able to remove the slightly held contamination that is responsible for loss of contrast and image quality in most TEMs. For those looking to work with two gases or a mixture of the two, please see our Plasma Prep™ III Process Controller for more information on this added module.

Including special front end accommodation port for the rod of your choice and everything else needed for operation of the unit as described above.