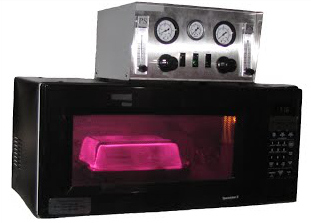 A Fast-Acting Barrel Reactor, ideal for samples that can withstand some high temperature exposure. For temperature-sensitive samples, simply decrease plasma power and extend processing time. The Pyrex chamber of this unit measures 4" in diameter and 6" in length.