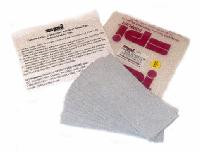 Easy to use - Highly Conductive!
These double sided adhesive, electrically conductive sheets were specially developed for attaching samples to be examined by SEM and/or EDS. Use silver, for its higher conductivity, for straight SEM work. Use carbon for EDS work where it is important to eliminate the x-rays from the substrate.

SPI Supplies Double Sided Conductive Carbon Sheets, as well as being conductive and adhesive have almost no discernible structure and provide the ideal background against which to view the entire specimen. It also greatly reduces the background x-ray count, giving greater accuracy and lower detection limits for your EDS work. Whether you are imaging or analyzing your specimen, the effect is just like dark field microscopy.

Both the silver and carbon adhesives have these advantages:

We are sometimes asked about the temperature range of use. We would be reluctant to recommend use above 130° C (266° F) outside the SEM or use within the SEM over 100°C. After heating, the adhesive will have lost its "tac" for holding something new but anything already being held should retain at last some of its original adhesive strength. Above 140° C, the adhesive will start to decompose and convert to a carbonized residue.

For use at low temperatures, the adhesive bond should maintain its basic properties at least to -20° C(-4° F) and depending on the stress being put on the bond, it would be much lower in temperature as well.

And a large number of users report that they use the carbon sheets in particular, for the mounting of samples for surface analysis.

A few words about purities and out-gassing:
These are the two most important questions in the back of the mind of anyone contemplating the use of the SPI double-sided conductive adhesive carbon or silver sheets. Over the years, we have, without fan-fare, continually improved the disc, sheet and tape products, so that today, we can safely say that we are not aware of anyone who has been able to detect, by EDS, anything coming from the (carbon) adhesive material itself. We are aware that at times, it has been reported that low levels of Si (coming from a release agent) can be detected by XPS. The discs are considered "UHV compatible" and there are no solvents or other volatiles that would come off the high vacuum of one of today's modern systems. Of course, one would expect to see a high Ag peak from the silver sheets, so we would not advise the use of silver when doing EDS or other types of chemical analysis.

Applications for XPS and other types of surface analysis

We are often times asked about the use of these sheet products for the mounting of samples being analyzed in surface analysis systems. Most of our experience is with the double sided adhesive carbon product so the following comments will apply to the carbon sheets, for the silver sheets we just don't have corresponding information.

We, ourselves in our own laboratories, starting in 1977, started using the SPI double sided conductive carbon sheets for mounting of certain samples, mainly powders, for XPS. We found that when we compared a blank metal strip vs. the same metal strip with a square a few mm square into the vacuum of the system, we hardly could detect any kind of deflection at all in the vacuum and when we did, it was on the same order of what was seen for the control sample without adhesive applied. We also found that insertion of a sample with powder applied produced sometimes a greater deflection. So we were convinced early on, on that basis, that the SPI Double Sided Conductive Carbon Sheets could be used for this purpose. We also found that the product, in sheet form was far more convenient to use, than in die cut disc form, since a minimum size piece could be cut out from the sheet material more easily than from the cut disc material.

Since that time, we have found that quite a large population of (especially XPS) users take advantage of these excellent UHV properties of the SPI Double Sided Conductive Carbon Sheets for applications in surface analysis, especially for the mounting of samples for XPS. We do know that the system does contain a plasticizer, however, the diffusion rate must be imperceptibly low in order for the material to exhibit such imperceptible impact on the quality of the vacuum.

Suggested storage conditions:
For short term storage, that is, less than a year or so, room temperature storage is just fine. But if you have stockpiled a quantity, or have purchased a large amount to take advantage of quantity pricing, we would suggest storing the excess under refrigeration. These are organic materials and at room temperature can, under certain circumstances, start to lose some of their "tac".

Removal of adhesive from SEM mount:
A number of solvents commonly found in the laboratory, such as ethyl alcohol or isopropanol will dissolve both the carbon and silver adhesive products, for easy removal, and recycling of the SEM mounts.