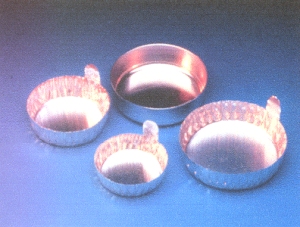 Carefully crafted with pure 0.9999% aluminum, the SPI Aluminum Weighing Dishes are offered in three different sizes and two edge finishes, crimped and smooth, to match every technical size requirement. The weighing dishes are generally used as a disposable item and their reuse is not recommended. The most common size is "Medium".

In the EM laboratory, the most frequent use is during "pre-embedding" procedures. For the plasma ashing of organics, these small aluminum weighing dishes are excellent substrates. They can be easily cut out into small pieces with a scissors or razor blade, mounted onto an SEM mount with the ashed residues and examined in the SEM, in situ.

Applications:
The main applications for these dishes are for routine weighing and moisture testing.

The release material can easily be removed by wiping with toluene or xylene. In larger quantities, perhaps the best way, is a low-temperature oxygen plasma treatment in the SPI Plasma Prep™ III low-temperature plasma etcher/asher.
Will I notice a difference in powder behavior when weighing once the layer if removed? Yes, because without the layer there is a tendency for a powder to stick (e.g. not release) the aluminum surface. This is mainly due to charges on the powder. The best way to deal with this “charging” problem is to use the Zerostat® AntiStatic Gun which will discharge the powder.