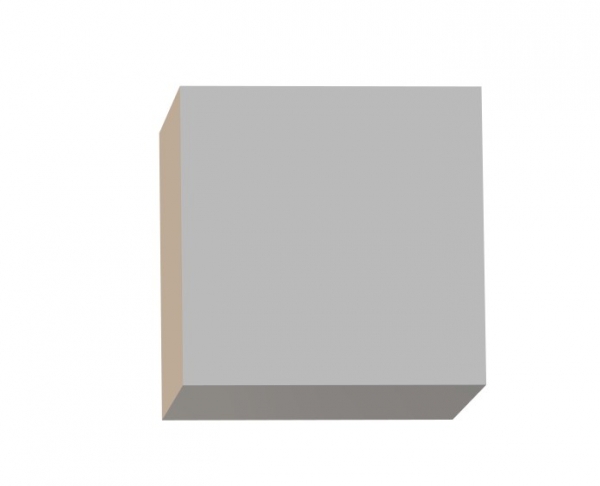 Very similar to ZYB(see below), this grade exhibits a mosaic angle as small as 0.8° +/- 0.2°. This grade is slightly less highly ordered than SPI-1 but is acceptable for most users. The lateral grain size can be up to 0.5 mm but can be as large as 1 mm. Note that this grade is slightly less "cleavable" than the 0.4° mosaic spread product, that is, SPI-1. Most workers find this grade more than suitable for all but the most critical samples, but priced low enough for routine use. Some users prefer this grade to SPI-1 because the cleavage steps are slightly wavy, so samples are held in place better (e.g. better adhesion).

SPI Supplies offers HOPG from two entirely different sources. It is not a matter that one is better than the other, the quality of both is excellent. However, the two HOPG Brands are made using different processes, and therefore their physical characteristics are a bit different. SPI is happy to present both types of HOPG and let our customers decide which will work best for them.

HOPG, is a relatively new form of high purity carbon and provides microscopists with a renewable and smooth surface. Unlike mica, HOPG is completely non-polar, and for samples where elemental analysis will also be done, it provides a background with only carbon in the elemental signature. The extreme smoothness of HOPG gives results in a featureless background, except at atomic levels of resolution. The modern-day material known as HOPG can be traced back to what at one time was called "Kish graphite". The SPI Supplies brand of HOPG should not be confused with the SPI Supplies brand of glassy carbon.

Graphite in general and HOPG in particular are described as consisting of a lamellar structure, like mica, molybdenum disulfide and other layered materials that are composed of stacked planes. All of these examples of lamellar structures have much stronger forces within the lateral planes than between the planes, thus explaining the characteristic cleaving properties of all of these materials.

Some interesting information about HOPG

HOPG because of its layered structure cleaves almost like mica. The usual approach is to take a piece of tape (e.g. 3M® "Scotch Brand" double sided tape), press it onto the flat surface, pull it off and the tape invariably takes with is a thin layer of HOPG. This freshly cleaved surface is what is used as sample substrate material. How many cleavings per sample? This is not easy to answer, but per a 2 mm thick block of the best grades (e.g. SPI-1 or ZYA), it is reported that one can get 20-40 cleavings. We do not guarantee a fixed number of cleavings. For the lower level grades the number of cleavings per 2 mm thickness will be less, but again just how much less we can not predict with accuracy.

In an atomic resolution scanning tunneling microscope image of the graphite structure of HOPG, there are two possible images. The image normally obtained looks like a close packed array; in this array each atom is surrounded by six nearest neighbors. The distance between any two of these atoms is 0.246 nm. Under ideal conditions, particularly if the probe tip is truly a single atom, you will see the "chicken wire" structure that shows the hexagonal rings that are the true structure of graphite; the center to center atomic distance in this image is 0.1415 nm. This distance in either case is an atomic property of carbon and it does not depend on the grade of graphite. The image shown here is the close packed array and that is the image obtained form the basal plane of HOPG under most circumstances.

Use as graphite monochromators:

The HOPG offered by SPI Supplies, especially the SPI-1 and ZYA grades, are reported to diffract x-rays and neutrons with a higher efficiency that any other material. For x-rays the intensities are increased up to five times greater than what would be possible with the lithium fluoride crystal it would replace. A singly bent focusing monochromator using these highest quality grades of HOPG, i.e. those with the smallest mosaic spread, result in intensities three times that of LiF at the same resolution.

This term is a measure of just how highly ordered is the HOPG. The lower the mosaic spread, the more highly ordered is the HOPG, resulting in a cleaved surface that exhibits virtually no steps. Lower mosaic spreads are also associated with higher prices. However, since the lower mosaic spread material is more "cleavable", one usually realizes more "cleavings" from the more expensive material, so the increased cost is a bit less than it might first appear.

This is where it gets a bit confusing: There are two distinctly different "brands", the SPI Supplies Brand and the GE Advanced Ceramics Brand. The processes used to manufacture HOPG are understandably kept quite secret but we have reason to believe that they are quite similar, at least they are much more alike than not alike. Available from both brands are three grades, the top one being the "calibration" grade, the second being "research" grade which is acceptable for most experiments and a "technical" grade where less demanding material is needed, perhaps when one is mainly interested in demonstrating cleavage properties.

The classical way of measuring mosaic spread is by x-ray diffraction, however, there are different methods reported in the literature and as one might expect, different measuring methods yield somewhat different numbers. The precise details of the x-ray diffraction methods used for the characterization of the HOPG from the two different sources is not disclosed publicly and therefore, and without commenting on which way is the better of the two, we must suffice it to say that comparing the numbers generated, one method to the other might be like comparing apples to oranges. However, we will touch upon what can be disclosed about the differences in the measurement methods below.

The structure is strictly columnar, that is, the columns run vertically within the flat slab of the material. The grain boundaries can be seen on the lateral surfaces. The mosaic spread is the angle of deviation of the grain's boundary from this perpendicular axis (of the columnar structure). Researchers in laser physics found this aspect of the information important.

Use at elevated temperatures

The hills and valleys on a cleaved HOPG surface are not calibrated as to their height. However, the crystallographic planes do have a definite structure and the height of a single step is 0.34 nm. Reference: L. Pauling, The Nature of the Chemical Bond, p. 235, 3rd. Edition 1960.

You may find steps randomly as a result of the cleavage process. An alternative method is to create etch pits by oxidizing the surface in an oven in air.

All HOPG grades have comparable purities and impurity levels are on the order of 10 ppm ash or better.

HOPG exhibits high chemical inertness to just about everything including osmium tetroxide. The one environment, however, where it will "disappear" quickly is in the presence of an oxygen plasma of the type generated in the SPI Supplies Plasma Prep II plasma etcher.

X-ray diffraction is done on only one of the two sides of each HOPG plate and the value obtained is the value reported. The two sides are not exactly the same, and there can be a slight asymmetry through the cross-section of each plate. When the HOPG is manufactured, one side ends up relatively flat looking and the other size somewhat "bubbly". Believe it or not, the tightest mosaic spread is the side that is "bubbly". The opposite side will be either the same mosaic spread or slightly less tight. We are changing over the packaging of the HOPG of the SPI Supplies brand so that there will be a bit of tape on that "opposite" side so that there could never be any question as to which side is which.

Some low levels of ferromagnetism has been observed in HOPG. This not a contamination issue but rather due to the highly ordered structure of HOPG, as compared to natural graphic which does not have such a structure.