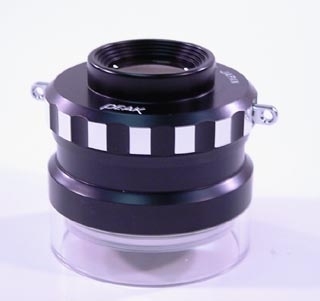 This loupe with 7x magnifying power is specially designed to allow for the examination of a large field of view that is 41 mm in diameter. The image viewed through this loupe is extremely sharp from the center to the edge, due to the correction of the loupe for astigmatism and other aberrations to the image. Ordinary magnifiers are corrected only for the central image. Indeed the same technology is used to produce this anastigmatic loupe as is used to produce fine anastigmatic photographic camera lenses.

One important distinguishing feature of this loupe from photographic lenses is that the position of the effective pupil of the loupe has been placed as far as 25 mm above the upper pole of the loupe, so that a user can inspect the whole image field by merely moving the eyeball, without moving the head. This is a very desired feature for one reading microfilm images or microscopy negatives, because it enables the viewer to inspect a number of negatives faster than just about any other way and with minimal eye strain.

Part of the barrel of this loupe is made of a transparent plastic tube so that opaque surfaces such as positive prints can be examined under the loupe, ones that can not be illuminated by transmitted light. A very smooth high precision focusing feature is available so that the loupe can be adjusted easily to accommodate the vision of individual viewers. A detachable glass scale (reticule) as shown (but poorly) in the illustration is provided at the object plane of the loupe, so that it becomes a high precision measuring loupe at the same time. The scale is graduated by 0.1 mm lines and spaces.

The loupe comes complete with a black neck string to which the loupe can be conveniently attached thereby allowing it to be carried around in a hands-free mode.