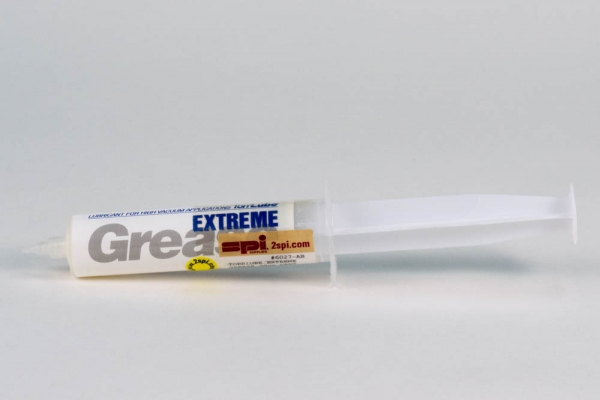 Each cartridge contains 2 oz. of TorrLube® ExtremeGrease. Cartridges are sealed to prevent leakage and contamination. A plunger and 16 gauge tip are provided.

TorrLube® Oil is an extremely pure Perfluoropolyalkether blend which is thoroughly distilled and then filtered through a submicron screen. TorrLube® oil has the ability to withstand thermal expansion and contraction as well as chemical and mechanical stress, while still maintaining consistent viscosity. These properties make TorrLube® the ideal lubricant for bearings, automated slides, and screws that have a tendency to gall or cold weld while working under extreme conditions.

TorrLube® is the specifically formulated lubricant for reducing friction to substantially increase the life of moving components in high vacuum applications. When applied sparingly to O-Rings and feedthroughs, TorrLube’s excellent lubricating qualities dramatically extend the integrity of vacuum to atmosphere seals, thereby improving vacuum system performance over a long period.

Under high loading pressures, such as those in robots, bearings, and shafts, TorrLube’s viscosity remains more stable than other lubricants, affecting superior performance over a wide range of pressures and temperatures.

TorrLube shows remarkable chemical inertness, which is beneficial because lubricants for vacuum systems can be exposed to a variety of chemicals. TorrLube® does not interact to contaminate semiconductor devices being processed in the system with free radicals such as NA++.

A Closer Look at the Multiple Benefits of Conditioning O-rings and Quad-Rings with TorrLube®.

Fluoroelastomer and Perfluoroelastomer O-rings and Quad-rings used in the Semiconductor Industry and other high-vacuum environments are often conditioned prior to installation. Traditional conditioning is done by oven baking the O-ring in order to remove water and other volatile material that would outgas while under thermal, mechanical, and chemical stress encountered in high-vacuum applications. The “baked-out” impurities in the O-rings surface leave micronic cracks and surface irregularities which will put the vacuum seal at risk.

TorrLube® is an excellent conditioner for O-rings and other elastomer seals that have a Fluorocarbon or Perfluorocarbon base. Conditioning an elastomer seal consists of rubbing a small amount of TorrLube® onto the O-ring, leaving a shiny, not wet, surface, then wiping the O-ring with a lint-free cloth to remove excess oil and any particles it has entrained. TorrLube®, applied in this way, will seal micron sized cracks in the O–rings surface and create a suppler O-ring which will properly unwind in its groove and create a better seal.

Elastomer seals not conditioned with TorrLube® have a tendency to swell and degrade when in contact with aggressive acids, bases, and solvents.
Premature seal failure can cause catastrophic failure.

Test ASTM E-595: Thermal Outgassing:
Test to determine the acceptability of material for use in spacecraft.

The allowable mass loss for acceptance is 1.0%
TorrLube Oil had a total mass loss of 0.088%

TorrLube's closest competitor had a volatile material amount of 3.08%

TorrLube Oil had a volatile material amount of 0.850%

We have data below that says the oil doesn't shear. TorrLube® oils have thicker films and carry higher loads than other types of lubricants. They are excellent EHD lubricants because they thicken and gain viscosity when under load.

Although TorrLube® oils are polymeric in nature, they do not break down when subjected to high rates of shear. Irradiation at 10 kilocycles in a sonic shear tester for one hour resulted in viscosity changes of less than 0.5 percent. Braycote is a PFPE based on the linear Fomblin Z oils and they don't carry load as well and can't go as high in temperature as branched TorrLube® PFPE's can go to. Some chemical stability data below. TorrLube® perfluoropolyethers do not contain acetyl linkage groups (-O-CF2-O-), which are significantly more susceptible to chemical attack. The absence of -O-CF2-O- linkages throughout the entire polymer chain is a fundamental feature of TorrLube®, and it is this feature that gives TorrLube® superior stability when attacked by aggressive chemicals, such as the Lewis acid aluminum chloride. The pendant trifluoromethyl group provides some shielding and further enhances the stability of the ether oxygen links of TorrLube® oil.

The combination of Lewis acids and perfluoralkyl ethers results in the formation of lower molecular weight and more volatile fragments by the depolymerization of the original oil molecule. With TorrLube® oils, this depolymerization occurs more slowly and by a different mechanism than fluids with different molecular structures. The threshold temperatures for the reaction of some commercial fluids in the presence of the Lewis acid aluminum chloride, as measured in a differential scanning calorimeter (DSC), are compared in Table 11. "