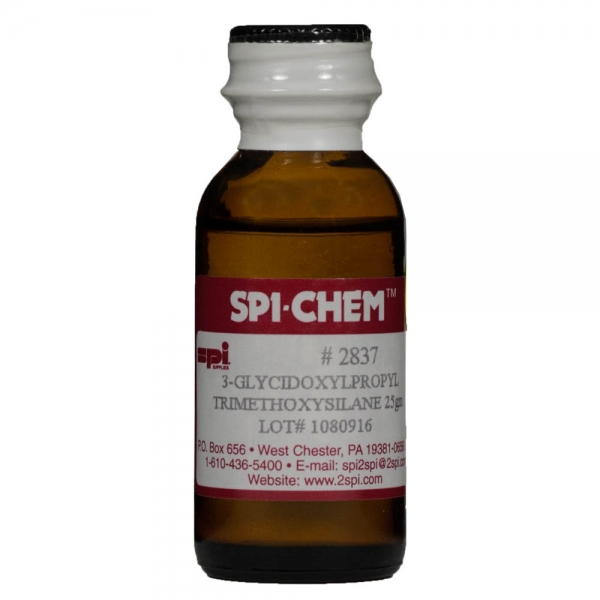 The Problem: Diamond knife thin sectioning of "hard" materials with relative smooth surfaces.
Smooth surfaces tend to lack the surface convolutions or porosity that enable good adhesion between the sample being embedded and the embedding resin. The 3GTMO system is designed for those working with an epoxy based system (such as SPI-Pon™ 812)  who find their embedded samples were being "popped out" by the diamond knife in the microtome. People experiencing this kind of problem include those working in both life science and materials science. For example those trying to embed smooth surfaced seeds, uniform metal spheres, glass spheres and certain inorganic pigment systems.

The role of 3GTMO is to serve as a "coupling agent" or "adhesion promoter" between the epoxy and the sample being embedded. 3GTMO was originally developed as an agent to promote adhesion for epoxy systems. We do not know about its efficacy for other resin systems such as "Epon® /Araldite®"  or acrylic based systems such as the SPI-Chem™ Low Acid GMA or Lowicryl® resins. We feel we can safely say that the benefits of 3GTMO will be realized with any TEM embedding epoxy including our own SPI-Pon 812 embedding resin kit.
So far as we know, there has never been any interference with the use of 3GTMO when samples are being osmium tetroxide stained.

The approach was again published by V. A. Lindley in Microscopy Research and Technique 21, 355-360 (1992), "A New Procedure for Handling Impervious Biological Specimens".

The papers recommend a pretreatment with 3GTMO with subsequent embedding in a Spurr epoxy formulation. The "soaking solution" is made up of a 1% solution of 3GTMO in a 50/50 water/alcohol solution with the treatment time being on the order of one hour. Then "dab off" excess liquid on a filter paper or lint free wiper and embed as normal.