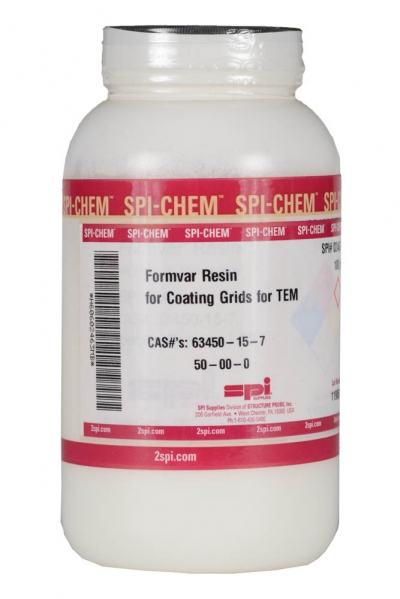 Formvar, otherwise known as polyvinyl formal, today appears to be the most widely support film for TEM grids worldwide. Certainly, in terms of requests that come into SPI Supplies for the custom making of filmed grids for customers, show an overwhelming desire for Formvar support films vs. any other support film. However, this preference is certainly less than unanimous and some customers swear by the value of some of the other support film materials.

While those specializing in electron microscopy might know of Formvar only as a superb grid support film, there are other important applications for Formvar resin, which has applications in a wide range of different areas, including wire coatings, magnetic tapes and adhesives.

Formvar can be dissolved in a variety of solvents with ethylene dichloride and chloroform being the two most popular. Another solvent is dioxane. Formvar in solid form is not hazardous where as when dissolved in a solvent, the product becomes flammable and therefore hazardous, meaning it is more expensive to ship, unless ordered in the  form. If you have not made filmed grids previously, then you might want take some of the advice from the master grid coaters at SPI. Or if this all sounds like too complicated of an exercise and you just want to get on with your research work (and not become a master grid coater yourself), then consider having SPI make the filmed grids for you. Additional information about solubilities can be found elsewhere on this website.

We have been told that when one requires a solvent that evaporates more slowly, one possibility is N,N-dimethylformamide. We know that this is an even more nasty kind of chemical than the alternatives, but we thought this information, for some, might be useful.

One needs patience to dissolve Formvar. It can take days, not hours, to get Formvar resin into solution. That is why the purchase of the ready-made solutions is often times preferred because of the inconvenience of doing one's own dissolution.

In order to provide the highest quality Formvar resin products, the solid form is packaged under dry conditions and the solutions are in "ready-to-use" form. Just remember that the making of high quality TEM grid support films is truly an "art" and does take most people some amount of time to learn. Therefore, once you have decided to do your own grid coating, then take advantage of some of the tips from the SPI grid coating experts! They will also share with you some of their best held secrets for the production of outstanding lacey carbon or lacey Formvar coated grids. Or if you would rather short circuit the time otherwise needed to look at your important samples, consider the purchase of grids already custom coated by SPI Supplies.

If you are new to your laboratory and have a bottle labelled as "Formvar", remember that unless it is the special grade of Formvar optimized for the making of support films, quite likely, the resin will not produce the kind of result expected. Furthermore, if the resin has aged beyond a certain (but unknown) point, there are indications that changes could have occurred, perhaps due to UV, and one should considered discarding the old resin and starting over with fresh materials. Fortunately, the Formvar resin is one of the lowest priced items one is likely to be purchasing for their EM laboratory.