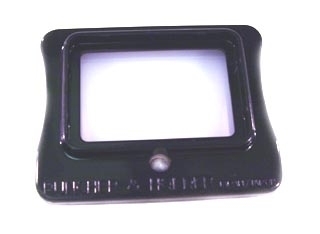 The puncher and holder assembly is a convenient accessory to be used in conjunction with the PEAK® Brand Loupe/Magnifier for 35 mm Film, 8X described above. It is used widely for the viewing and quality checking of 35 mm developed film and color slides. As any one who has done it before knows, the inspection of a long roll of film can be tiring and not very efficient but if the magnifier and puncher and holder assembly are used in combination, one can depress the plunger and impart to the film a "v" shaped cut into the perforation, thereby greatly speeding up the process of film inspection. The same holder can be used for both 35 mm film (one side) and a finished slide mount (the other side).